I wrap my fingers around my tea.  Blasting into my face is this too-bright halogen bulb on the other table.  It screams for attention through its thin paper lampshade.  I don’t have time to be doing this but I just have to.

Here’s the rough sketch for the drawing I’m supposed to be working on.  Drawing won’t make me feel better right now but writing about it will.  Writing haunts me that way, seduces me. 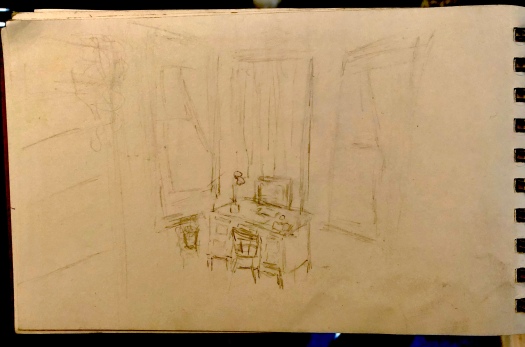 The desk in the drawing has been called “The Magic Desk” by certain close friends.  It’s large, awkward, heavy, imposing, green.  A beautiful, unusual green.  Something between a sea-green and a medium forest green, with a teal underpainting.  Whoever owned it before me knew something about color.

It was found on the street in 2005 by one of my best friends and I in Berkeley.  He saw it first.  Originally he wanted it as much as I did – but being an oil painter – he cordially relinquished the desk to me, the writer.

I hadn’t even had any kind of a desk before this one conveniently materialized, only a couple weeks after moving into the first place I could’ve ever fit one.  Especially of that size.  It was meant for me, we agreed.

After that the desk came everywhere with me that didn’t require a passport.  I couldn’t live without her – or at least, couldn’t leave her behind somewhere or discard her.  Clunky, imperfect, but wonderful.  Berkeley, San Francisco, Oakland – now she lives with me here.  It may be time to let her go soon, I’m not sure.

I earned degrees on her.  I wrote hundreds, probably thousands of hours of poetry and stories and essays on her.  I drank bottles of wine on her, cocktails, beer.  I watched movies by myself on her.  Learned languages, stacking tall beams of flashcards balancing so high I feared they’d tip if a door slammed somewhere in the house.  Escaped into art photography.  Hosted get togethers and dinners and hang outs on her and friends and lovers sat with her.  Scrolled profiles, chatted, wrote emails, found a true love online leaning on her.  I suffered final exams on her.  I suffered heartbreak on her, writing in journals way late into the night after night, after working the long shifts in a miserable job I loathed so passionately.  My loneliest times, I cried on her.  Sometimes for many days.  So many late nights, so many.

Each time I moved to a new place, everyone said it would be impossible to get her through the door but I found a way.  This is my desk.  Of course we’re getting my desk through the door.

I’m supposed to be managing my classes and career change happening all at once so I haven’t written much lately, but this clearing is also happening.  I’ve got to get to the actual drawing, but first I wanted to write more – needed it.  There’s a certain feeling in my system that can only be tamed this way.  A craziness, a desperation.  It’s subtle but intense.  It’s like the tide coming in and swallowing everything up.

Overtaking reason.  Against the pressure of this super impacted highly stressful schedule I dropped everything and wrote 2,500 words more than this, then cut it all out.  We do not have to keep everything, though it’s tempting.  We do not have to prove we did something valuable with our time.

One thought on “Write to Survive”